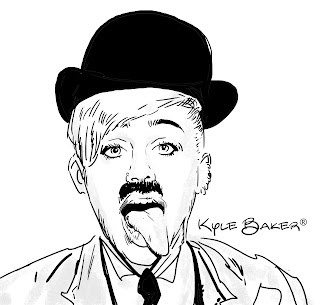 I'm a Miley fan from way back. I remember watching "Hanna Montana" on TV with my kids, and laughing aloud at the skills of an incredibly gifted comic actress. I think she and Raven Simone are the funniest of the Disney pack.

Last night, humanity lost their collective minds at what they consider to be the latest proof of the End Of Days; Miley's twerk. Judging from the internet messages friends and relatives are sending me, the importance of the Twerk Heard Round The World rivals, no, surpasses the severity of the Fukushima meltdown which has the world's military forces currently united to avert the end of life as we know it. To demonstrate I have my priorities in order, I shall now elaborate on the subject of the controversial Cyrus Twerk, mainly because I want the page hits.

The dance number Miley performed at the VMAs was a reprise of her performance in the nominated music video WE CAN'T STOP The refrain of the song is "WE CAN DO WHAT WE WANT TO." The video is clearly intended as comedy. Miley Cyrus is a very successful and hilarious COMIC. The video features dancing bear costumes, Miley making out with a mannequin, a guy eating money in a sandwich, and all sorts of funny stuff like that. In the video scene where Miley twerks, she is being mocked by a group of well-endowed black women who shake their heads derisively. The casting of this shot highlights the fact that Miley lacks the key piece of anatomical equipment necessary for an effective twerk. It also points out that Miley is not Black, and that she looks ridiculous trying to act like a Black girl, with her silly-looking hip-hop grill and ghetto gestures. She's DELIBERATELY being crazy and silly in the video, she's famous for being FUNNY! The video illustrates the sentiment, "I CAN DO WHAT I WANT TO."

I suspect that it is the message, not the Twerk, that people are so terrified of. I recently watched a much-maligned work of another great comedian, Charlie Chaplin's film, "Monsieur Verdoux". I was spellbound by this film, and consider it to be one of Chaplin's best.

Bear with me, I'll get back to Miley's buttocks soon enough.

Watching "Monsieur Verdoux", and then reading about how the critics and public attacked this film and Chaplin when it was released, a thought occurred to me; Many artists have a similar creative arc. Early success followed by public vilification. It also seems to me that I usually prefer the latter-day work to the more popular early work of these artists.

Artists go through phases. At the beginning of our creative career, we need public approval. We need to get that first job, a foot in the door, a career launch. Popularity is a priority. Chaplin's "Little Tramp" films were a celebration of the working-class people who bought movie tickets. The films were designed to entertain an audience that was struggling with economic collapse and in desperate need of reassurance and laughter. Chaplin's Tramp was a poor working stiff at the mercy of evil bankers, landlords, and supervisors. He always outsmarted the villains and triumphed, which warmed the hearts of the downtrodden audiences facing similar struggles in real life. Miley's "Hanna Montana" was a formulaic Disney product, full of everything Disney does best; crowd-pleasing popular entertainment designed for the broadest audience possible in order to collect millions of dollars in revenue. (Walt Disney's Mickey Mouse was actually patterned after Chaplin's Tramp, which set the template for all Disney product which followed.)

This brings us to the next phase of an artist's development, the section I find most fascinating, and it happens at different ages for different people. There comes a point in every successful artist's career when he no longer needs to be popular, because he is no longer driven by the need for money. The artist has had a success, has made a reputation, has a fan base, and often some sort of royalty income or ownership of back catalog of popular work. Money is no longer a motivation. The artist continues to work, but is now solely motivated by a desire to create art, or a need to express one's self. For Chaplin, the turning point was "Monsieur Verdoux". Chaplin had more money than he needed, and he owned all of his classic films. He never needed to work again if he didn't want to. He could have made any film he wanted. HE OWNED THE STUDIO! Chaplin chose to create a new, villainous comic character, in many ways the opposite of the Tramp. The film is a showcase of his craft, his skill in disappearing into a character. Chaplin is not trying to be liked, not trying to please. He is demonstrating a supreme level of technique, showing you what a talented artist he is. Audiences rejected him for it.

Miley's declaration, "I'LL DO WHAT I WANT" has a similarly chilling effect on the public at large. How dare she cease to be a performing monkey whose sole desire is our approval? Why doesn't she want to be popular? BECAUSE SHE HAS ALL THE MONEY ALREADY! SHE'S DOING THIS FOR FUN! BECAUSE SHE ENJOYS BEING AN ARTIST! If you like it, great, if you don't, she's still gonna eat.

One of my favorite scenes in "Easy Rider"; the biker protagonists wonder aloud why folks seem to dislike them so much. Is it the long hair? The rock music? The sex? Finally one character yells, "They hate what we REPRESENT! FREEDOM!"

People who don't care about being liked scare the crap out of folks. They are also the most effective. I am always most interested by an artist who works only for the art. I'm much more attracted to an artist's true self-expression OF ANY KIND than I am in someone who just wants to be popular.
Posted by Amanita Minute at 6:05 PM 16 comments

Posted by Amanita Minute at 8:57 AM 1 comments