This is the first artwork for the upcoming Image series. Inspired by this true event. More to come! Click the art to enlarge.

"As a whole, Nat Turner is the most evocative illustrated book in the modern medium."

"Taken together, Baker's pair of Nat Turner volumes make for a damn fine piece of comic art – a remarkable achievement that definitely deserves to be collected in a single handsome well-bound hardback..."

Our deepest sympathies to the Drake family.

From Liz Glass:
Mr. Drake was our neighbor. When I went to his Manhattan apartment to run an errand about two years ago, I was not familiar with his comic book work. His well-ordered duplex had books, photos, antiques, but nothing to give away his comic book reputation.

I had meant to just drop off something and then race to the next 15 errands, but he invited me in to chat. His apartment was decorated in the charming "1950's-First-Generation-in the-New-World" style. Every decoration/memento had a story! And like my grandparents always did for first-time visitors: the requisite living room tour. In all honesty, I really enjoyed it, which is why I am writing these words. He was a very sweet man.

He showed me some of his recent cartoons to get my reaction; he was going to send them to a magazine for seniors, I think.

His wife had recently passed away. Her absence was omnipresent but Mr. Drake clearly had not given up on the years left to him. He kept busy. His office - overflowing with stacks of paper and open filing cabinets - had a life of its own.

When I had heard Mr. Drake was in the hospital, I really did mean to send a card or flowers. But with three small children, I am just terribly busy.

I sincerely regret not doing so.
Posted by Amanita Minute at 1:36 AM 1 comments 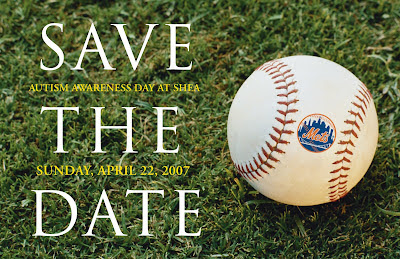 There are still some $10 tickets left!
Reply to liz@kylebaker.com for this unbeatable price.

Most seats will cost LESS (only $12) than what you would normally pay, and the proceeds will be donated to organizations and schools helping children living with autism, like Autism Speaks.

This is a great way to see the game and support a wonderful cause. As one first-timer said of last year’s game: “We’re not into sports, but our family and friends had a blast. The Mets - the whole experience - was amazing.”

For best seats, the earlier you order the better. If you know any Mets fans, please feel free to forward this information to them.

To buy tickets directly online or to make a donation:

1. Go to http://aaday.qsac.com/ (Tickets purchased at mets.com will not be credited to these charities/schools.)
2. When you type out the form online, after you entered your credit card number to pay, at the end of the order it will ask you to fill out your affiliation.
3. Please type in "NYCLI". Thanks!

Posted by Amanita Minute at 9:22 AM 4 comments


Share this video. People will think you're cool.
Posted by Amanita Minute at 8:44 PM 1 comments

Yes, children, no more shall you cry in the wilderness, "How long, Lord, How long?" For Kyle Baker has descended from the mountaintop bearing the second and final paperback in the Nat Turner series! This book contains the previously unpublished 3rd and 4th chapters of the comic book, and is now available from IMAGE COMICS.

Subscribers copies are being mailed out this weekend from Kylebaker.com, so let me know if you've moved!

Check out the first online review we found of NAT TURNER Vol.2: REVOLUTION here, from Don MacPherson at eyeoncomics.com

For those fans who wrote in asking if the individual single-chapter comic books were still available, they are not. Here's why;

See, the first two issues were originally published in an affordable format which provided 48 pages to readers for the unheard-of price of $3.00. That's more than twice the page count of your average DC or Marvel book. I thought it was a good value for the reader, even though it meant less profit for me...but I've learned never to second-guess the fans. Fans disliked the $3 format.
It wasn't just that one guy, either.
Here's another. Fans everywhere were demanding that I publish the book in a more expensive format, on better paper. Well, folks, the customer is always right, and I quickly changed the format to a better quality paper and binding, and ceased production of the cheaper edition.

Next year, we're planning an even more expensive edition, so you may want to buy the paperbacks now, since it's the last time you'll be able to get this story at this price. That's a promise from the owner.

Speaking of ownership, I LOVE the little TM symbol that now appears next to the NAT TURNER logo. I've trademarked a human! You might even say I've (ahem) RE-BRANDED Nat Turner.
Posted by Amanita Minute at 9:35 PM 1 comments

I stumbled across this image on the net, and since I own it, I'm posting it. Enjoy.

Besides Kyle, other queried professionals include animation genius Bill Plympton, as well as Danny Fingeroth, editor of WRITE NOW - essential reading for professional (or aspiring) writers of comics, science fiction and/or animation.

Here's Kyle's answer to question #3: "What can the con organizers do better next year?"

KYLE BAKER: "I think a statue of me in front of the Javits Center would be perfect. A big statue of me made out of Legos would have made this perfect."
Posted by Amanita Minute at 5:20 AM 1 comments

Jackson, MS – April 4, 2007— Other Heroes will be joining Spider-Man on the walls this spring.

Other Heroes: African American comics creators, characters & archetypes is an exhibition of comics and comics-inspired artwork. It will be on display April 4-25, 2007 in the Jackson State University Art Gallery, Dollye M.E. Robinson School of Liberal Arts Building, Jackson, MS.

In addition to showcasing the work of outstanding African American comics professionals, Other Heroes brings to the JSU Gallery a vast and diverse array of talented artists working in a variety of media, (comics, photography, painting, and installation) to make art that portrays and investigates African American issues. “The show is centered around the empowerment of Black creators, characters, and stories, the depictions of the Black image in popular culture, and the reclamation of our images,” Other Heroes co-curator Professor John Jennings said in a recent interview with UVC Magazine.

“We hope the exhibit and catalog will provide a positive space to discuss the social, economic, psychological, and philosophical impact of positive and negative racial representations,” added co-curator and Eye Trauma Comix editor-in-chief Damian Duffy.

Other Heroes also represents an effort to raise funds for the local community. All profits from the sale of the Other Heroes catalog, soon to be published through print-on-demand website Lulu.com, will be donated to Scholarship America for the charity’s Disaster Relief Fund, which provides tuition support to low income Gulf Coast students displaced by Hurricanes Katrina and Rita.

Other Heroes is made possible by The Jackson State University Art Department, The University of Illinois in Urbana-Champaign Research Board, The UIUC African-American Studies and Research Program, and Eye Trauma Studios.

For more information on Other Heroes and a full list of artists go to http://www.eyetrauma.net/brain/curation.htm

Last week, I announced that my favorite comic of all time, TALES FROM THE CRYPT was returning with all-new stories! I mentioned one of my favorite old tales, "Foul Play".

"Okay! If you're so smart, Mr. Memory -- what was the name of the story set in a vampire nightclub that served blood which came pouring out of faucets that were stuck into the neck's of vampire victims? HUH? HUH???"

Well, I know the answer, but I thought it would be fun to make a contest of it! So, the first twenty people to e-mail me the TITLE of that classic story, and the name of the ILLUSTRATOR will receive their choice of either a PDF comic book, or their favorite KB animation in IPOD format, or some nice wallpapers for the desktop. I'll post the answers next week. The contest entry deadline is March 10, 2007. e-mail your answers to me at kylebaker@kylebaker.com , along with your prize preference. Don't post your answers on this blog, because it'll ruin the game for everyone. Have fun!
Posted by Amanita Minute at 9:22 PM 1 comments

Email ThisBlogThis!Share to TwitterShare to FacebookShare to Pinterest
Labels: TALES FROM THE CRYPT trivia contest

Posted by Amanita Minute at 11:03 AM 1 comments

Thanks to Marc Edwards for these photos. 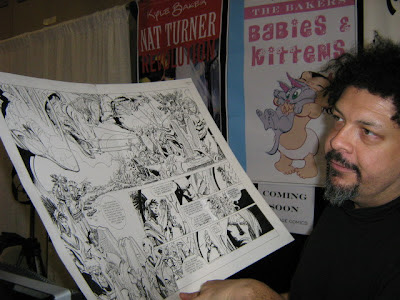 1. I am always in awe of Walter Simonson's artwork. Note how clear and readable his images are even at this reduced and blurry size! 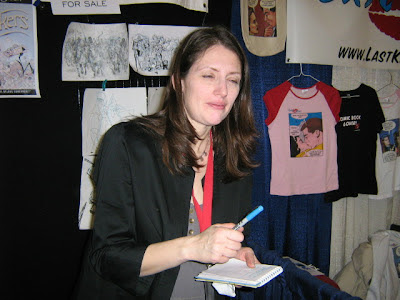 2. I bet Liz a dollar she couldn't close her eyes exactly as the camera shutter opened. Looks like she wins. 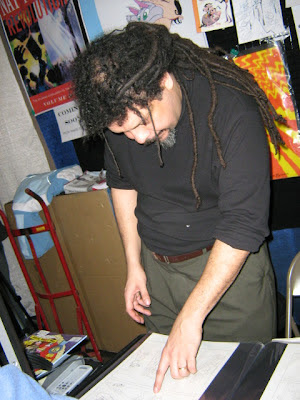 3. I was so tempted to photoshop my bald spot, but life's too short.