Video WINTERVIEW with the McCloud girls.

The Bakers were recently paid a visit by the McClouds. Their Daddy is Scott McCloud, who is a weird cartoonist, so our two families have nothing in common.
The McCloud kids, Sky and Winter are just as creative as their dad, and make videos called "Winterviews". As you can see, they must have been trying to interview the Baker girls Lillian and Jackie, but the boring old man wouldn't get out of the shot.

Scott's new book is called "Making Comics". If you read it, you will be able to make comics!
Posted by Amanita Minute at 11:33 PM 0 comments

Read about THE BAKERS MEET JINGLE BELLE at COMICON.COM
Posted by Amanita Minute at 9:04 PM 0 comments

Just in time for Christmas! Written by everyone's favorite, Paul Dini! Just the right size for Christmas stockings. The comic, I mean, not Paul. 'Tis the season for Quality Jollity! 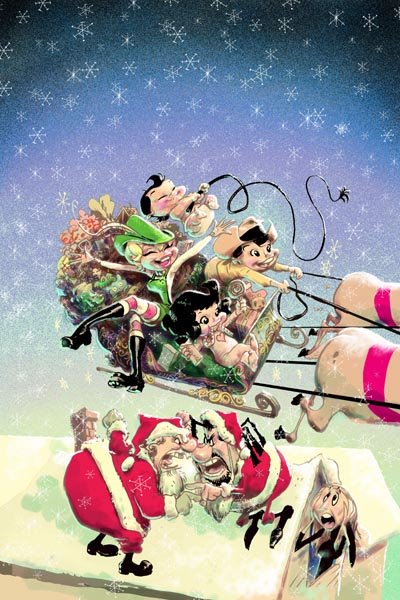 Here's what we wrote about it in September.
Posted by Amanita Minute at 10:39 PM 0 comments 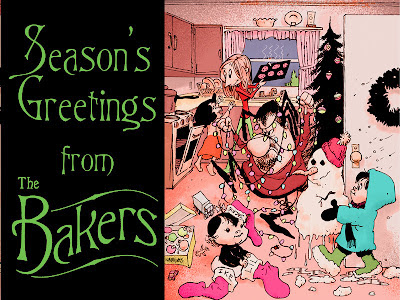 Ike needs a Tissue in THE NOSE. Based on a story from the new full color deluxe hardcover book THE BAKERS: "DO THESE TOYS BELONG SOMEWHERE?" available in comic stores now and in THE KYLE BAKER GIFT SHOP" at http://www.kylebaker.com/www/kbgiftshop/giftshopHOME.html A gorgeous holiday gift, by the way!

Behold The Majesty! Experience The Wonder! Our Most Extravagant Animated Motion Picture Yet! SLEEPING BEAUTY Based on a story from the book CARTOONIST VOL.2 available in comic stores now and in THE KYLE BAKER GIFT SHOP at http://www.kylebaker.com/www/kbgiftshop/cartoonist2.htm. 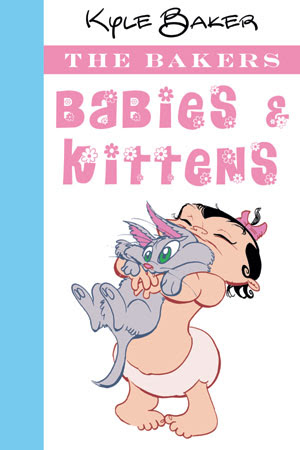 This story originally appeared in PW Comics Week on November 28, 2006 Sign up now!

Image Comics executive director Eric Stephenson described Baker as "one of the most talented creators in the field. His work is at turns powerful, at others funny, but always masterfully executed. We couldn't be prouder than to welcome him to the Image Comics family." In addition to a new trade paper volume of Nat Turner , Image will also publish four original Baker paperback titles. The books include Important Literary Journal ,Special Forces ,Laika and The Bakers: Babies & Kittens . Baker says he's also planning a book on his animation work (with a DVD included) as well as toys and sculptures based on his Bakers characters.

Important Literary Journal is a parody of high-art comics and Baker joked that the book will include "the meaning of life," essays, stories and gag cartoons as well as an instructional on "how to draw stupid." Special Forces is the story of a small town autistic teen ushered into the army by overly aggressive military recruiters and sent off to Iran. "Think C atch-22 meets Being There ," says Baker. Laika is an update on the first dog launched into space in 1957 by the Russians. Fifty years later, Sputnik returns to Earth with a rocket-lagged Laika, and the little dog has developed super powers. Baker says the book tells how "a little American girl saves the planet from alien monsters with the help of a superpowered Russian dog." Last but not least, there is a new installment of Baker's popular series, The Bakers , loosely based on his on household. Mom and the kids want a cat, but Dad's allergic and, naturally, hijinks ensue. Baker told PWCW the new Bakers book will "blow the needle off the cute-meter! You can't make this crap up. I live like this."

After four years self-publishing, Baker said he's just too busy making books to continue publishing them himself. "I didn't know how much work it was to be a publisher," said Baker. "But it helped to see the workings of publishing. I figured out all the things that my old publishers weren't doing." Baker said he still loved "selling the books and meeting fans at conventions," but said he was happy to turn over certain chores, like fulfillment, to Image. "I don't like filling orders. After I'd get that first big order, I'd drive to the post office with 1,000 books and three baby seats in the car. After that, I spent too much time chasing down $6 orders."

Kyle Baker Publishing released four books: The Bakers , the first volume of Nat Turner and two volumes of Cartoonist . While he's happy to be with a small independent house like Image, Baker said he began self-publishing because he was tired of having "bone-headed conversations with the publisher about my drawing." He also complained about the difficulty getting big publishers to work on unconventional marketing or promotional tactics. "The stuff I do has built-in markets," said Baker, pointing to books like his religiously oriented King David as well as family fare like The Bakers . "Sometimes, with big publishers, you can't even get a box of your own books."
Posted by Amanita Minute at 6:08 PM 2 comments

Starting in February 2007, Image will be presenting the concluding volume of the critically acclaimed Eisner Award winning graphic novel NAT TURNER, upcoming episodes of his hilarious family humor series THE BAKERS, and some new titles as well, including the long-awaited IMPORTANT LITERARY JOURNAL.

"Taking my books to Image was a no-brainer," Baker says. "First of all, it's a major publishing house run by cartoonists! And not just any cartoonists, really great cartoonists! I've been wanting to join up with these guys since they started the company in the '90s, and now that the line has expanded to include a wider array of genres such as humor, horror, war and mystery, I feel there's finally room at Image for Kyle Baker books. The Image folks have a real passion for comics and really go out of their way to do things right, and for a guy like me, there's nothing more important."

Image's presentation of Kyle Baker's new work starts with Nat Turner Book 2: Revolution. The winner of the 2006 Eisner Award for Best Reality-Based Work charges to its shocking conclusion with Turner's final stand against the evil institution of slavery. The Washington Post called Nat Turner, "a great teaching aid..." that evokes "the diabolic slave trade's real horrors." Don't miss the conclusion of one of the decade's most important comics.

Image Comics Executive Director Eric Stephenson says, "Kyle is one of the most talented creators in the field, and his work is at turns powerful, at others funny, but always masterfully executed. We couldn't be prouder than to welcome him to the Image Comics family."