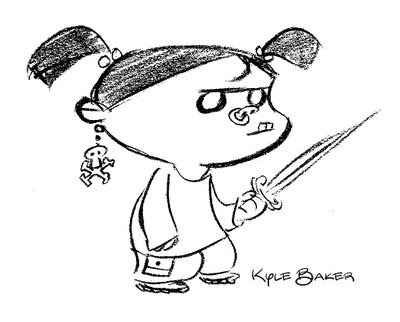 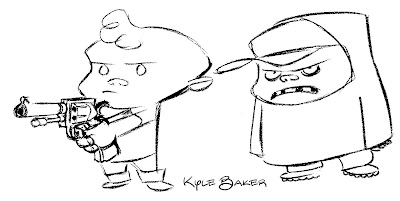 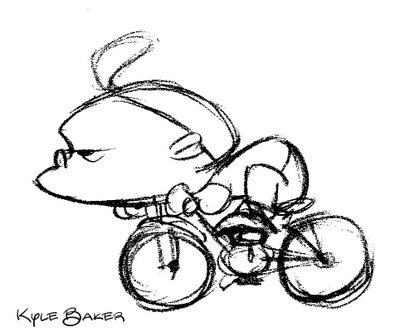 Like many cartoonists, I have more ideas than time to execute them. When deciding what my next project will be, I often go to my files and choose a great unpublished idea from years ago. Today I was working out my production schedule for the next three animated cartoons of 2009. I decided it was time to shoot a cartoon I wrote a story for in 2002.

These drawings were in that file from 2002, and I'd completely forgotten I did them! They're idea sketches, and I've changed the story a lot since 2002, so these characters probably won't be in the cartoon. It seemed a shame to let these drawings go to waste (I like them!), so I'm posting them on the blog for your amusement.
Posted by Amanita Minute at 12:01 AM 5 comments

He's The Best At What He Do. 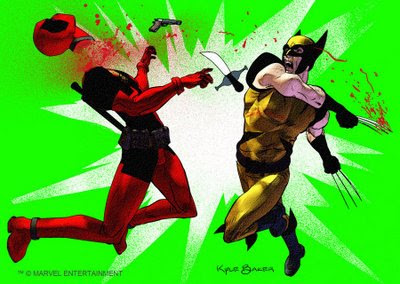 Still Marveling this week. Almost done with the story. Such things they tell me to make!
Posted by Amanita Minute at 5:15 AM 4 comments 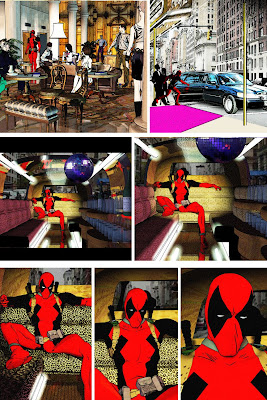 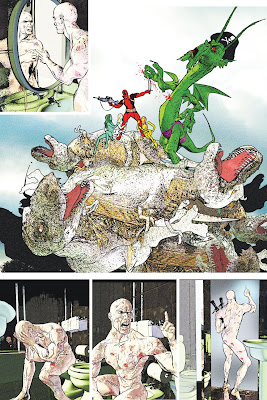 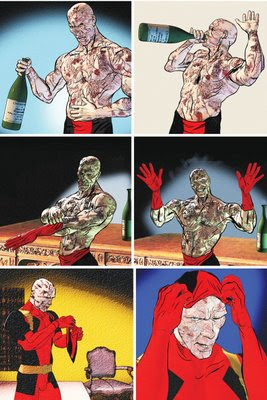 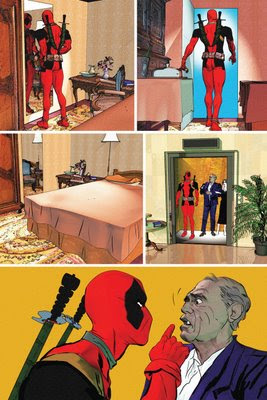 Click the images to enlarge.
While I'm waiting for Bob Morales to deliver the Captain America script he's writing for me, Marvel editor Axel Alonso assigned me a Deadpool story to illustrate. Charlie Huston wrote the script, and it's one of the weirdest cool stories I've had the pleasure of working on. A special Marvel No-Prize will be awarded any True Believer who can identify the big green Monster. The pirate hat was in the script. As a matter of fact, everything in the illustrations was in the script, including the bidet.

That Tigra design I spent so much time on a few days back ended up being only an inch tall in the finished art, and also naked (it was in the script!). Maybe I'll do a Tigra story in the future so I can use the design. I like the way she turned out. There's also a naked She-hulk and Shanna on the same page, although if Shanna's naked, I'm not sure how anyone will know she's Shanna. But it was in the script.

It's fun to be doing so much Marvel work lately. They were really impressed by the Hawkman job I did for DC recently, and Axel asked if I could do some work for them in the same style. I used a similar photo-realist approach on my recent Obama bio for Harper-Collins, which has been well-received by the folks over there, so I think I'll stick with this style for a while as long as the job offers keep pouring in.

Judging from the fan mail I've been getting, readers like the new style, too! Thanks!
Posted by Amanita Minute at 7:49 PM 6 comments 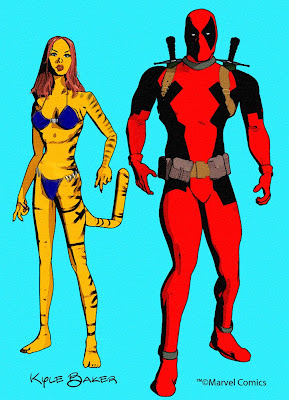 Here's some more character sketches for a Marvel job I'm working on.
It's a different job from the Captain America art I posted a couple days ago.
I'm doing a lot of Marvel work right now.
Posted by Amanita Minute at 9:56 PM 0 comments

For an upcoming Marvel gig.

Posted by Amanita Minute at 1:46 AM 3 comments