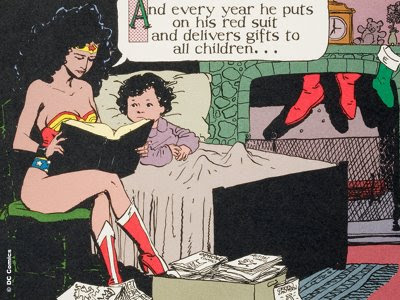 Every year, I get a nice gift from DC Comics, a great organization I've been associated with for decades. The gift is often very useful and practical, such as a portfolio, jacket, or clock decorated with the DC logo. This year, I received a 2GB flash drive, which I am thankful for, since a digital artist can never have too much storage! As a bonus, DC included "twelve desktop wallpapers selected from DC's superb Holiday portfolio." The first image I saw was the one presented here.

I love it when people send me my own artwork as a gift. It happens more often than you'd think. I guess everyone knows I'm my own biggest fan. The little girl in this picture is my niece, Elizabeth, which is why there's an "E" on her Xmas stocking. She's grown now. The red boots coming down the chimney belong to the Flash, which was revealed inside the Christmas card this drawing was originally done for.

Other pictures on the flash drive include pictures by Mort Drucker, Bruce Timm, Jeff Smith, and Alex Ross, so it is all pretty cool to look at. Thanks, DC! I didn't get you anything!
Posted by Amanita Minute at 1:51 PM

Thanks for sharing the back story on that one, Kyle.

Love the softness of your early work.

Did you make a card this year?

You should TOTALLY draw Wonder Woman! I'd buy that comic every month if it was you. She could meet Agent Morgan.

Why don't you draw in that style any more? I hate everything you've done since WHY I HATE SATURN. You should do a sequel and draw it in this style.

Kyle, did you send yourself a royalty check for your own art? Did the bank ask for ID when you tried to cash the check? Sorry for the weak humor, but I find that gift strange for a number of reasons. Best, Nique

Ha! Glad you guys like the older stuff. I'll have to draw more stuff in that style.